The Emperor card is often seen as a symbol of stereotypically masculine personality traits. He represents the father figure that is powerful, protective, and wise. The emperor is a representation of power and authority in both its positive and negative aspects. His presence is frequently felt through his actions, with people feeling either challenged to grow or being afraid that they will be crushed by him.

This card can represent someone who needs to learn how to control their power better or it could signify an out-of-control tyrant who abuses his power for selfish reasons only. But as with all tarot cards, The Emperor card meanings shift some depending on the situation and cards surrounding it in the reading. In this blog post, we’ll discuss all the ins and outs of the Emperor card in the Major Arcana of the Tarot. 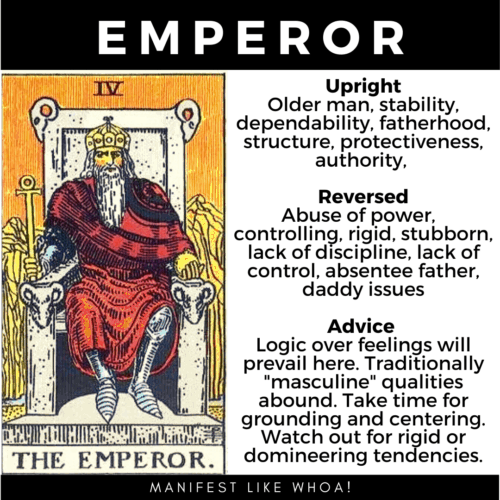 The Emperor as Feelings

Upright, The Emperor tarot card represents feelings of stability and security. You may be feeling safe and secure in your life, with a strong sense of structure and order. This card can also represent a father figure or an older man who you feel is guiding you in the right direction.

Reversed, The Emperor tarot card can signify feelings of being overwhelmed by authority figures or struggling to get ahead. You may feel stuck in a position of powerlessness with no way out, or feeling like you are not being taken seriously by those around you.

This card can also represent someone who is excessively domineering and stubborn, as well as feelings of daddy issues or lack of commitment.

The Emperor as How Someone Sees You

Upright, The Emperor means someone sees you as a natural leader with a strong sense of control, structure, and ambition. Your peers may look to you for direction and advice, admiring your strength and perseverance. Reversed, The Emperor card when someone views you can mean they see you as too controlling or domineering.

The Emperor as What Someone Wants From You

Upright, The Emperor signals that someone wants you to take charge, offering advice or direction. They may need your help setting up a plan and organizing it, relying on your strength and leadership to get things done. Reversed, The Emperor card when what someone wants from you can mean that they desire for you to let go of control and be more flexible in order to move forward. They may want you to take a step back from the situation and let them try something different.

The Emperor As Advice

Upright, The Emperor advises you to be assertive when it comes to making decisions. Don’t shy away from taking responsibility for your actions or leading a group of people. You should trust in yourself and your abilities to make the right choices. Reversed, The Emperor may indicate that you need to be more diplomatic and less overbearing with your decisions. Make sure not to force your will upon others or be too rigid in your approaches. Allow for compromise and collaboration. 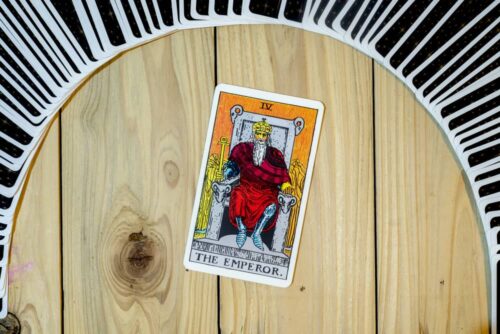 In general, this card signifies stability and strength with a dash of dominance thrown into the mix.

Though, this does not always mean the person is of the male gender, or that it is a person at all.

Rather, when The Emperor shows up, you are being asked to consider those traits in yourself or in others.

Upright Meaning Of The Emperor For Love

When The Emperor shows up in a love reading, if you date men this may represent an older man or someone with very masculine, dominant traits.

Usually The Emperor in the upright position is very stable, orderly, and has all of his affairs in order.

He is a suitable mate, though he may not be the most exciting. If you pursue a relationship with an upright Emperor type, you should have a comfortable relationship where you know what you’re going to get.

If you date women and you receive the upright Emperor in a Tarot reading, it means you need to take on some of the qualities the Emperor represents.

Make sure she feels safe around you, knows how you feel, and that she can trust you. Be dependable and reliable so that she knows what to expect from you, and you will have chances at winning her affections.

If you have been experiencing relationship problems, when the Emperor shows in the upright position, view it as a hint that the relationship has a chance once you gain more stability, structure, and dependability.

When the Emperor appears upright in money, business, and career readings, it means that you are being given the opportunity to demonstrate leadership skills and make a name for yourself.

You have the power, knowledge, and confidence to build your own empire. You just need patience, time, hard work, and dedication.

Also, if you are in business for yourself, The Emperor is a good sign of leadership.

You are the boss and you have everything you need to manifest business success, now.

If you want to go down a new career path, you have infinite potential to succeed.

Financial opportunities are abundant and accessible to you now.

You should have a hopeful outlook for your financial future.

The Emperor in a reversed position could be someone’s worst nightmare.

He is still authoritative, controlling, and dominant — but it is dialed up to level 10.

And that’s not all!

Underneath it all, he is also insecure, lacks confidence, doesn’t have his affairs or his life in order, can’t keep up with responsibilities, but he insists on running the show.

When The Emperor shows up reversed, watch out for egotistical and narcissistic actions.

When the Emperor shows up reversed in a love reading, there is a strong sense of imbalance that needs major correction if the relationship is to flourish.

Usually, one person has way more power than the other and is using that power in manipulative or harmful ways.

If you are single and The Emperor shows, take a hard look at past relationships with male figures in your life.

Do you have “daddy issues” that need resolution before you can attract and maintain a healthy relationship?

Do you have issues with authority or control?

In this case, The Emperor reversed could either represent the wrong type of man showing up in your life.

Or that you need to work on issues from your past.

If you date women and The Emperor reversed shows up, it means that you are off in how you are presenting yourself.

Either you are being too pushy, or not forthcoming enough about your actions.

Take a hard look at yourself and how you present on the dating scene and adjust as needed.

When the Emperor appears in a reverse or negative position in money readings it means you may be going through some tough financial times.

But these are mostly within your control.

Remember, The Emperor reversed is kind of a know-it-all, but doesn’t really have the consistency or have put in the work to reap the results.

It may be that you no longer feel inspired by or interested in how you currently earn money. And the lack of enthusiasm is leading to lackluster results.

Or it could mean that you made some poor financial decisions in the future, but instead of owning up to and fixing those mistakes, you pretend the failure didn’t happen.

You can get out of whatever situation you’re in, but it’s going to take your taking an honest look at what’s wrong so you can make it right.

Tarot is a powerful tool that can help you understand your life and the world around you.

It’s also an incredible way to develop your intuition.

And your intuition serves as a powerful guide in all aspects of your life.

There are many benefits to learning tarot on your own, but it can be hard to stay focused and organized without the right tools.

That’s why I created this Tarot Journal – so you have everything you need right at your fingertips to make learning tarot fast, easy and fun!

Imagine how empowered and excited you’ll feel unlocking your inner power with this journal by your side!

This journal has everything you need from spreads for daily readings, weekly layouts, monthly layouts, yearly layouts, and even space for personal notes!

With this book by your side, you’re covered.

No matter what happens in your life you will always be able to find clarity through tarot.

Get your Tarot journal right away on Amazon Prime!

NEXT: The Hierophant Tarot Card Meanings