This is a blog post describing the different meanings of the Two of Wands tarot card in the Minor Arcana of the standard Rider-Waite deck.

Read on to discover the different meanings of the Two of Wands upright and reversed for money, love, and other situations in your life. 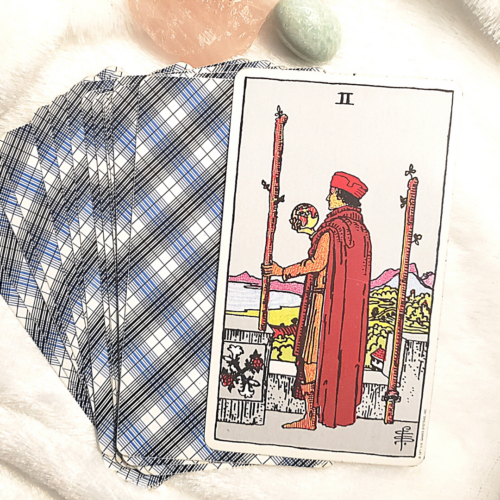 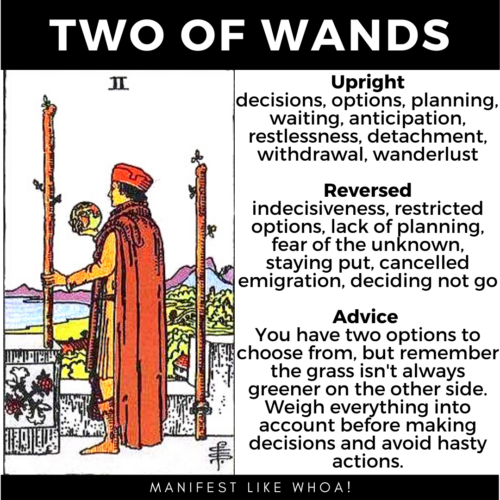 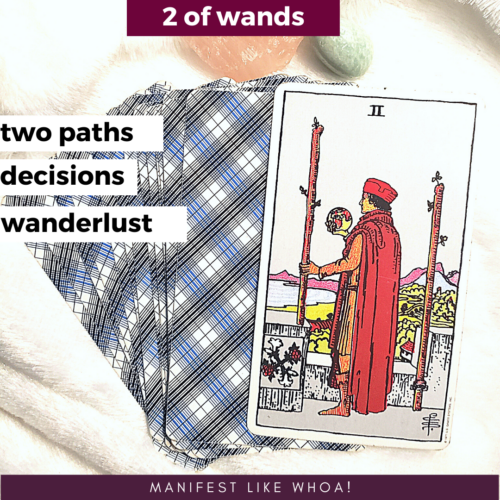 Generally speaking, the upright Two of Wands brings an energy of anticipation and waiting.

This can be related to making a decision – you may be left feeling restless and uncertain as you weigh your options, unsure if the grass is greener on the other side.

There can be a sense of detachment or withdrawal during this time as if one is no longer content with what they have.

There may also be a wanderlust present, a lack of contentment, or boredom with your current situation.

Business partnerships can be strong at this time, as there is a sense of cooperation and expansion overseas.

New journeys and opportunities await you, but there is also hesitation in embarking on them.

Furthermore, you may be feeling restless and confused about whether or not to stay in your current situation.

If you’re in a committed relationship and the Two of Wands shows up in your reading, it means that the relationship is suffering from a lack of passion.

You may be experiencing a sense of boredom or a lack of motivation to make the relationship go further.

This could also mean that you are feeling restless and confused about whether or not to stay in this relationship.

The Two of Wands suggests indecision; you’re unhappy with the status quo but unsure if you are quite ready to leave to explore what’s on the other side.

Or, it could be your partner who feels this way.

In some cases, the Two of Wands can indicate cheating.

Either way, the Two of Wands is not a good card for relationships as it means one partner has a foot out of the door and is just about ready to leave.

That’s not the only meaning of the Two of Wands upright for love, however.

If things in your relationship are going smoothly, it could mean that you two are going to be traveling overseas together soon, have the opportunity for travel, or have a joint decision to make.

It could represent your having to come together to make an agreement on a course of action.

So, all is not lost if you see the Two of Wands in your love tarot spread for your relationship.

Make sure you pay attention to your intuition and the other cards in your spread.

If you’re single and the Two of Wands appears in your reading, it means that you are extremely restless with being single.

You may have asked the universe for your perfect partner and while you’re trying to be patient, you’re done with waiting.

As such, you may be ready to dive head-first into the first situation that comes along, just to get yourself out of this phase.

You may also be feeling confused about two potential partners.

One may appear better than the other on paper, then the other gives you the butterflies but you know they aren’t really the best choice.

You’ll have to make a decision soon, but it may be hard to choose when you can’t seem to see the big picture.

Staying single is still an option, so choose wisely!

How to Read Tarot: A Modern Guide
Check Price

If your main concern is your career path when the Two of Wands shows up, you will have two options to choose between.

Should you stay at your current job even if it’s making you unhappy, or explore your horizons and go elsewhere?

Do you take the promotion offered at work, or do you stay in your current position with less responsibility?

Start your own business and take the risks that come with it, or stick to the safe path you’re walking on now?

Whatever your choice is, the Two of Wands highlights that you’re currently unsatisfied with where you are now, and you do need to make a decision soon.

Remember though, that the grass isn’t always greener.

You could make your situation worse if you jump ship too fast!

When it comes to your money, the Two of Wands upright is actually a more positive card.

It brings an air of balance and stability.

So if you’ve experienced rocky times with your money and things have been going up and down, you can expect these issues to resolve soon.

When the Two of Wands appears reversed, it represents a time when you’re feeling stuck.

You may have had a change of heart about something and are now indecisive about what to do next.

This card can also indicate canceled travel or a delay in your plans.

It could mean that you’ve chosen the safe option instead of going for something that excites you.

This card also shows up when you’re about to be disappointed – things don’t go as planned.

Or maybe you’re expecting something to thrill you and then it happens and everything feels flat.

The Two of Wands reversed is the card of lackluster potential.

You’re not feeling inspired by anything and the options in front of you seem mundane.

This can be a sign that it’s time to make a change, but it’s also very possible that you’ve already made the wrong decision and are now regretting it.

If you are in a committed relationship and the Two of Wands shows in a reversed position, it represents the energy of “playing it safe.”

The Two of Wands reversed shows up when two people have outgrown the relationship but they want to stay together “for the kids”, or keep up appearances for the public.

But, the love and passion, and genuine desire to continue the relationship are gone.

This card can also represent travel plans being delayed, or the case that one of you wants to travel or even move far away but the other does not.

You are not in the same place with your desires and plans and this will cause tension in your relationship.

If you’re single and the Two of Wands shows reversed, the meaning is similar to the upright Two of Wands.

You will have the choice between multiple partners, but one of them is likely to be your ex.

If you choose them, it will feel like a step back and you won’t be satisfied with the relationship.

You’ve been meant to move on from this person for months or even years!

If your ex is already in a new relationship, choosing them again may get in the way of that new romance.

This may seem like a good idea at first, but this relationship would not last long and you would quickly remember why you broke up in the first place.

The Two of Wands reversed means you still have free will, of course, but if you have to choose between two potential partners, you’ll have the best outcome if you choose the safest option.

How to Read Tarot: A Modern Guide
Check Price

The Two of Wands reversed in a career reading means that you are bored with the same old routine.

You want something exciting, but you are afraid to change your job for fear of unemployment.

But, if you don’t make a move, you will stay stuck where you are and things will never improve!

This can also be a sign that your job is in jeopardy or that layoffs are possible.

In a money reading, the Two of Wands reversed means that you are feeling uncertain about your financial future.

You may have had some recent setbacks and are now feeling scared and unsure about what to do next.

This is not a time to panic, but rather to carefully plan your next move.

Final Thoughts On The Two of Wands Card

The Two of Wands is a great card because it can come up when you’re about to start adventuring.

It’s a positive sign that what lies ahead is just the beginning of great things, even if it seems scary!

Just remember that the grass isn’t always greener on the other side, but when faced with a decision you must actually make a decision.

Avoid letting life choose for you.

More of The Two’s Tarot Cards