The Tower tarot card (XVI) is the 17th Major Arcana card in the standard Rider-Waite Tarot deck. While other cards in the tarot deck, such as Death and The Devil usually frighten people (for no reason), The Tower is really the scariest card in the deck. The Tarot card represents your biggest fears and worries coming true, but this is unavoidable and the more you fight it the worse it tends to get. A negative Tower event in your life is generally a devastating event. But that doesn’t always mean it will have negative consequences in your life, even if it seems like it at the time. Read on to dive deep into the meaning and symbolism of the Tower tarot card. 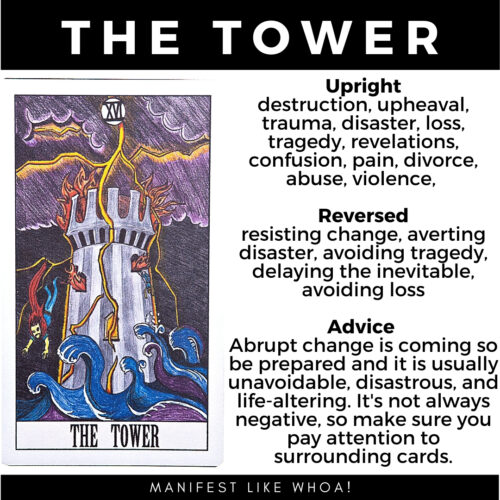 The tower upright generally means a life-altering event has just occurred or is on the way.

It could be a natural disaster, something that completely shakes up your life, or perhaps it’s an unexpected event in your career, family or social life.

Whatever it is, this change could be distressing and disorientating but can also accelerate spiritual growth and even improve you as an individual.

The important thing to remember is that this change is unavoidable, you must go through it to get to the other side.

So don’t fight it because the harder you try the longer and more painful it will be, there is no way around this.

The good news is that the Tower card represents growth through adversity and it’s likely in the end you will come out of this event as a stronger and a better person.

On the bright side, it’s important to consider the other cards surrounding the Tower card.

Depending on what the different card combinations are, the change can be major and dramatic, though not negative.

For example, the Tower could represent a big move across the country or even the other side of the world if you start a new job — but this would still qualify as a major upheaval to your current life.

On the other side, if the Tower is paired with another negative aspect, it can signal something extremely difficult like the loss of a loved one, violence, theft, bankruptcy, or even a natural disaster.

Regardless, pay attention when the Tower card shows up and be prepared for whatever is to come.

In a relationship reading, if you’re currently coupled and The Tower card shows, it means that something is about to change.

However, you will experience lots of turbulence and chaos.

This could lead to divorce or the breakup of the relationship, but not always.

The Tower can represent truth coming out from the past that maybe you didn’t know about.

Or, it could simply be a traumatic event that you and your partner will go through together that could either threaten to break you apart or bring you closer together depending on how you handle it.

For example, it could be that you go through a disaster together where you lose your home or your finances.

This could break you apart, or you could come together to deal with it, support each other, and ride the wave of destruction on to better days.

It probably won’t be exactly the same.

If you are single the Tower card is often a message that something is going to fundamentally change in how you view yourself, how you approach relationships, or even within a casual relationship you have in your life.

It can represent your being in danger, so be extra careful who you trust and let into your life.

You are not headed for a pleasant or happy experience, regardless.

It could be that your self-esteem or ego will take a hit as you come to terms with the reason why you’ve been unhappily single for so long.

This self-revelation will likely make you feel worse, but on the bright side, it can prompt you to change how you approach dating and relationships.

If you have been bitter or angry because of your past dating experiences, this is one of those harsh things that can hit you in order to make you a better person and make smarter choices when it comes to love and romance in the future.

In a career reading, the Tower upright signals a major shift that will make you uncomfortable.

On the negative side, it usually represents job loss through disaster, firing, or other means of unemployment.

In business, it can represent losing your business, funding, or even a potential lawsuit that threatens your livelihood.

At its most positive for business and career, The Tower card may represent your shifting to a promotion or receiving more responsibility that threatens your sense of peace in the short-term.

You may also be headed for conflict at work that threatens your sense of security.

When it comes to your money or financial possessions, the Tower card upright signals something going seriously wrong.

Usually in the form of bankruptcy, losing your investments, or some other major change that causes you pain.

You could also be devastated by a natural disaster or violent act of nature that causes you to lose your possessions.

In a positive way, the Tower card upright may be giving you the warning to save more money in case something does happen.

It can also be signifying things breaking down so things can come together better than before.

Your perspective here and how you choose to act can soften the blow if you choose.

Reversed, the Tower card signals that you may have narrowly avoided disaster, or that you can avoid disaster in the future if you make some corrections.

For example, if you’ve been feeling ill and go to the doctor, you might get a test that identifies an early-stage problem that you can narrowly escape if you change your diet.

More commonly, however, The Tarot reversed means that there is inevitable change ahead of you and you’re resisting it for whatever reason.

This card shows up to let you know you can’t avoid this change forever, and you’ll have to face it.

The only question is, how much of a fight will you put up?

The Tower reversed can also mean you have survived a negative experience in your life and are now stronger for it.

However, something fundamental has changed and will never be the same.

Finally, if your Tower event has already occurred and you are in the phase of picking up the pieces to rebuild, you are being called to analyze how you are rebuilding.

If you’re simply trying to rebuild things in the same shaky way they were before they fell apart in the first place, you’re working backward.

If you want to truly heal and recover from your Tower events, you need to learn the lessons they have taught you and apply new knowledge for a better result.

If you’re in a relationship and the Tower shows in a reversed position, it could mean that you know the relationship is damaged but for some reason you’re still holding on.

If your partner has been abusive or cheating on you but you’re just not ready to leave yet, The Tower reversed shines a light on the truth, which is that you need to cut the cord and move on.

Even if it will be painful to do so.

If your relationship has already survived its Tower event and you’re committed to holding on and moving forward, The Tower reversed means that you’re trying to force the relationship to stay the same as it was before.

But you will soon see this is impossible.

You will have to face the facts and open up to the truth that if you remain in the relationship, things will have to change.

If you’re single and The Tower shows up reversed, it means that you likely have narrowly escaped a dangerous or disastrous romantic situation that could have torn your life apart.

The message here is to identify who or what that ways and make sure you don’t repeat the same mistake — because next time you may not be so lucky.

Another possible meaning is that you have to finally confront any past traumas or baggage that are preventing you from moving on.

If you’re carrying around anger or resentment towards a previous partner and holding it against current romantic prospects, The Tower reversed is telling you to let go and let love come into your life again.

If you’re still holding on to a bad breakup, The Tower reversed tells you that it’s time to finish the chapter on your ex and to be at peace with them as much as is possible.

In a reversed position for business and career, The Tower represents your barely holding on to your job or business even though the writing is on the wall that you’d do better letting it go.

You may think you’re doing yourself a favor by staying in this situation that’s no longer serving you, but that’s not the case.

What’s holding you back is fear, not logic.

If you have been able to keep your head above water and survive in this job as long as you have by lying low and avoiding conflict, The Tower reversed represents that you cannot afford to continue that strategy any longer, so it’s time to make a change before a change is made for you.

If you wait, you will be far worse off than if you took the initiative to change your own circumstances.

Avoiding the truth will never set you free.

Financially speaking, The Tower reversed means that you are trying to avoid a financial disaster because you’re afraid of what’s next.

When really, you’d probably be better off accepting the loss and moving on.

For example, if you are on the brink of eviction or foreclosure and are trying to make sacrifices to stay in your current home, it might be better to accept the loss and make other arrangements — even if it’s hard.

You have to fully accept the situation so that you can move on.

This card is telling you that if something does go wrong, whatever your Tower event is, will be just as bad as what happened before and it might even be worse if you don’t accept it for what it is as quickly as possible.

Ripping off the bandaid and dealing with the wound underneath could help you save yourself in the long run.

Final Thoughts On The Tower Card