The Moon tarot card (XVIII) is the 19th Major Arcana card in the standard Rider-Waite Tarot deck. It shows up when things appear to be one way on the surface, but underneath, more truths need revelation. When it appears in a Tarot spread as a playing card, the Moon is considered to be slightly unfavorable, though, as always, you need to consider the other cards surrounding it. Read on to dive deep into the meaning and symbolism of the Moon tarot card. 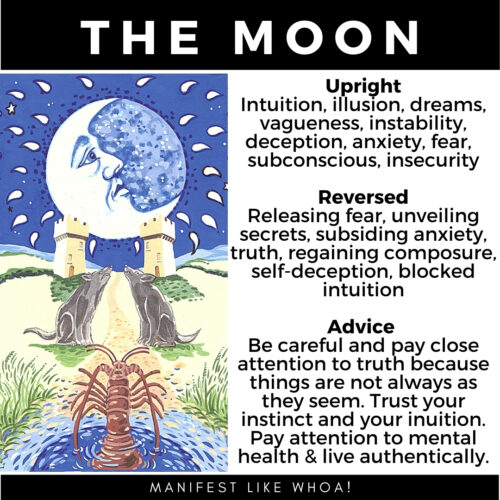 When The Moon shows in an upright position, make sure you pay attention to your intuition and your “gut feeling.”

If you are in a situation and everything looks right on paper but something inside of you is telling you that things aren’t right — go with your gut.

Another meaning of The Moon is that you should pay attention to your dreams and other spiritual means of communication.

There could be more information that you’ve missed, and the universe could be trying to tell you something in an unconventional way.

If you are prone to anxiety and depression and The Moon shows, however, you must be mindful of your mental health.

If you feel yourself going into a spiral, you’ll want to seek professional help right away to prevent things from getting worse.

Sometimes it can be hard to tell the difference between an actual problem or something that’s all in your head.

Don’t be afraid to get an outside opinion.

Other times, The Moon can show during a woman’s menstrual cycle — so if you identify as a female and have a cycle, you may consider if you’re experiencing mood swings or other hormonal issues that could be making you feel out of whack.

If you’re in a relationship and The Moon shows up, it could be that while things seem perfect on the surface, you have some fundamental issues underneath.

This could manifest as you and your partner putting on a brave face for the outside world, when really you’re on the verge of breaking up.

It could also signal lots of disagreement, fighting, and overall incompatibility.

This is not necessarily a bad card that signals the end of the relationship, however.

It could just mean you need to address some deeper issues in your relationship and find a way to compromise or understand each other better.

Insecurity or mistrust could be coming from either side, so look at it from both points of view.

If you want to salvage the relationship, you’ll have to determine why the fighting is happening and how to put a stop to it.

Also, pay attention to how you communicate with your partner so that there are no misunderstandings.

If you are single and The Moon shows upright, this can represent someone coming into your life who may have strong appeal, charisma, and seem like they are perfect for you.

They may sweep you off your feet, make you feel how you want to feel, and yet be completely wrong for you.

If this card shows up, make sure you move slowly and really get to know a person before falling too deep.

Much of the time The Moon in this case will symbolize someone who has ill intentions, might take advantage of you in some way, or has an ulterior motive for dating you.

The Moon also can represent you putting on a mask to show to the outside world while protecting the core of who you are.

Perhaps you feel insecure, like you’re not good enough, and like you have to be “different” to find love and acceptance.

While it’s okay to protect yourself and your energy, make sure you’re still being authentic to yourself and who you are.

Make sure you’re not settling for less just to avoid being alone.

The right person will love you exactly as you are.

When it comes to your career, job or business, The Moon in an upright position signals that there is some information you don’t know that could change your outcome.

Try to follow your gut and your instinct, but make sure you gather the facts before coming to a conclusion.

Furthermore, The Moon upright can indicate someone being shady toward you.

It could represent a jealous coworker or even someone choosing to do business with you just to get ahead at your expense.

Pay attention to how other people are acting toward you and just be aware of what’s going on around you.

When it comes to your finances, The Moon in an upright position can signal that a major decision, deal, or opportunity coming your way has the potential to go sideways and turn out negatively for you.

Avoid making any investments or risky moves with your money right now.

Or, at least get a professional opinion and make sure you have all the facts before you act.

Often, The Moon indicates someone is trying to con or deceive you.

If you can, wait this out because everything done in the dark will eventually come to light.

Patience is critical at this time.

Generally speaking, The Moon reversed can have a few different meanings.

First, it can signify that anything done behind your back is going to come to the surface.

You will find the truth.

This also works in reverse, however. So if you’ve been harboring a secret or being less than honest, your truth will also be revealed.

Second, if you’ve felt emotionally anxious or fearful and you can’t pinpoint why, this is a sign that that moment will soon pass and you can move forward in your life feeling more grounded.

Additionally, The Moon can alert you to the fact that you’re deceiving yourself — but you won’t be able to do so forever.

Ultimately, The Moon reversed is a signal that what was done in the dark will now be revealed and you or others won’t be able to hide from the truth much longer.

If you’re in a relationship, The Moon reversed usually means some truth is about to come to the surface.

If you’ve felt like something has been “off” in your relationship but don’t know for sure what it is, you will find out soon.

Likewise, any infidelities will also be exposed.

If you are wondering where your relationship is headed, how your partner feels about you, or if you are on the same page, whether good or bad you will find out.

The Moon reversed can also be a sign that you are deceiving yourself about your relationship.

Perhaps you don’t want to believe that the person you’re with doesn’t love or care for you in return.

Or you’re deceiving yourself into thinking that this person will change soon and you will finally be happy.

The truth will come to light and it will be unavoidable and undeniable, so get ready for that experience and plan for what comes next.

When The Moon reversed appears in a singles love reading, it can mean two different things.

First, it could mean that you’re exiting a period of anxiety and low self-worth, and you’re starting to find your value.

Taking this renewed self-perception into the dating scene could help you attract the right person.

If you’re not quite there yet, you might consider trying shadow work to get you there.

On the other hand, it could mean that you’re deceiving yourself in some way.

If you’re single but dating someone who you’re interested in and they’re emotionally or physically available, it could be that they are married or have some other secret.

Deep down inside, you’re likely aware of this possibility, but you might be avoiding the truth.

You’re turned a blind eye, but the truth will come to light soon enough.

Don’t let this person use you or make excuses. You deserve better.

The Moon reversed in a job, career, and business reading means that you are blocked in some way.

If you work in a creative niche or business, this could manifest as writer’s block or some other uninspiring experience that has you blocked creatively.

If this is happening, try to focus on the present moment.

Don’t obsess over what might happen all the time because it will only make the situation worse in the long run; trust in yourself and things will start to turn around.

If you’re not in a creative niche, The Moon reversed could symbolize your being stuck and blocked from moving forward.

You may feel lost and confused right now, and you can’t focus on the task at hand.

The best thing to do is sit down and think everything through.

If you need help, try bringing in an outside perspective or getting professional guidance.

After this block is resolved, your career will move forward in a positive direction again.

The Moon reversed has a similar meaning for The Moon upright when it comes to your money.

It indicates that now is a bad time for investments or anything risky.

You would do your best to keep your money in your pocket for now and avoid making any moves.

If you must make financial moves, seek professional help and guidance.

Final Thoughts On The Moon Card

Discover the meaning and symbolism behind Moon card of the Major Arcana in the Rider-Waite tarot deck.