Much of the time we focus on the signs that our manifestations are on their way. But what if your manifestation is NOT coming? Do you know what to look for? Today I want to talk about something that happens to us all, at least from time to time.

Table of Contents show
1- Negative angel numbers
2- You get “no” tarot cards
3- You sense total stillness
4- You start to have bad dreams
5- Your emotional health begins to suffer
6- Your search for signs dominates your life
7- You keep changing the goalposts
8- You keep asking for the same thing
9- It’s been a very long time
10- You get a definite “no”
What to do if your manifestation is not coming?
Discover What’s Blocking Your Manifestations

Here are ten signs that your manifestation is not coming, and how to cope.

The first sign that your manifestation is not coming is that you start to see “negative” angel numbers.

Well, angel numbers are neither positive nor negative by default. But some point to success much, much better than others.

Generally, angel number 5 means there is going to be some change in your life. Just like with the tarot, fives are somewhat questionable. So if you want to manifest something, it’s taking a long time, and you get an angel number that has a heavy influence of fives — it may not be the best sign.

Another angel number that can mean you have to wait before getting what you want is the seven, particularly with love and romance.

While in numerology, seven usually represents good luck, it is a love manifestation number that represents solitude, introspection, and isolation.

That’s the total opposite of bonding, commitment, togetherness and partnership.

However, angel numbers are but one way the universe communicates with us.

Read on for more signs and signals that can give you clues to whether your manifestation is coming or not.

Next, I personally think everyone who is interested in manifesting and the law of attraction should own a tarot deck.

Whether you want to learn to read tarot for yourself or not, tarot cards are excellent divination tools to get messages from the universe.

If you’re already manifesting things, you have a toe in the water anyway. Might as well jump in!

Pulling a tarot card about your situation and glancing at the image (even if you don’t look up the card to see what it means) can give you so much information!

Some cards you just know the answer is a hard “no”. Others, you can tell it’s a yes or maybe.

Then you could still always look up the meaning!

Before I became a professional tarot reader I would pull a card a day for myself and just see what it felt like intuitively.

It’s so easy, and you gain so much insight into your life.

If you think your manifestation isn’t coming and seek confirmation, get a deck of tarot cards and learn to pull a few.

Sometimes it’s very easy to tell that your manifestation isn’t coming. Just by how you feel!

It’s a feeling of total stillness and lack of movement.

When you’re fully in alignment with your goals and you experience synchronicities that let you know you’re on the right track, don’t you just know it?

I know for me, I can feel it in my bones.

I can smell it in the air. You just have an inner knowing that what’s for you will not pass you and that it’s coming.

But the reverse is also true.

When your manifestation is not coming, the air is still. Things feel quiet, motionless, and you start to question and doubt.

Never underestimate the power of your intuition.

If you think you can just “sense” that your manifestation is not coming — you’re probably right.

4- You start to have bad dreams

Another sign your manifestation is probably not coming is that you have vivid nightmares after manifesting.

Especially if you ask the universe for signs and you start to have bad dreams!

This is a huge wake-up call that maybe you should lay off of what you’re manifesting.

5- Your emotional health begins to suffer

Another sign that your manifestation is probably not coming is that you start to have emotional issues that weren’t there before.

It doesn’t have to be anything too big or devastating (though if you have serious emotional issues it’s worth checking out.)

But, for example, if you’re manifesting something and shortly thereafter you start to feel sad, low, tired, and lethargic while waiting for it?

It could be a small sign that your manifestation is not coming.

6- Your search for signs dominates your life

Another often overlooked sign that your manifestation is not going to come is that your search for signs that it IS coming dominates your life.

This is more a function of you skipping the part about “letting go” of your intention once you’ve asked for what you need.

It’s okay to ask for signs that your manifestation is coming.

However, it’s not cool to constantly ask for signs, and let it dominate your life.

That frantic, chaotic energy is to the polar opposite of what trusting in the universe and in the process looks like.

If you behave this way, your manifestation is probably not coming. But luckily there’s a fix for this…

7- You keep changing the goalposts

While it’s perfectly okay to ask for something, receive it, decide it’s not exactly what you want, and ask for changes, doing this over and over again is called “changing the goalposts.”

Doing this too much and all adds up to a lack of clarity.

And if you know anything about how the universe works, it rewards clarity and shuns muddied intentions.

Another problem with this is that you probably aren’t expressing gratitude for the things you have in your life.

Which will also keep you from being able to manifest at a high level.

If you ask for an extra $100, then it manifests as additional work hours. You’re not satisfied with that so you complain and start a new money manifesting exercise and ask for more money a different way. Then maybe it comes and it’s not to your liking so you keep going…

Eventually, you’re going to stop getting anything.

That’s a sure-fire way to make sure your manifestations will not be coming in the future!

8- You keep asking for the same thing

Another way you can tell your manifestation probably isn’t coming is if you find yourself asking for the same thing.

People ask me sometimes how often they can do manifestation exercises.

The answer is generally you want to wait at least a few weeks in between. You want to give time for things to align in your life.

But most things shouldn’t take that long to manifest — especially if you’re a beginner.

There are easier ways to manifest $50, you know?

That money is probably not coming and you’d best move on.

The next point is if it has been a very long time relative to your goal, it’s okay to accept that the manifestation probably is not coming.

Let’s say you want to manifest a vacation with your boyfriend.

A few months go by, you haven’t had this vacation, but now your relationship is kind of on the rocks.

It is likely that your manifestation is not coming and you have to accept that.

Last but not least, keep your eyes and ears open to the truth.

It’s fine to have hope and try to improve your life through manifestation and the law of attraction, but on the other side, you have to still be somewhat realistic.

If you want to manifest a specific job, you go on the interview with high hopes but later you find you were rejected — that means your manifestation is not coming.

Or, if you want to manifest your ex back but they specifically told you they don’t want to talk to you, blocked you from all channels, and threatened to get a restraining order if you won’t leave them alone (hopefully it isn’t that bad, but you get what I mean lol…)

Then your manifestation is not coming.

You must be honest with yourself with the signs.

So many people get caught up looking only for the good signs that they completely bypass the bad.

Don’t let this be you!

What to do if your manifestation is not coming?

If you see signs that your manifestation isn’t coming, the first thing to do is relax.

Nobody will have success 100% of the time (okay, maybe some people — but not most!)

It’s totally okay if sometimes you miss the mark. The thing is, not every situation we think is good for us is what we need.

Much of the time if you are patient, you find that something so much better is just around the corner for you.

Another thing you can do is take a break from manifesting for a while.

If you’ve been going at it super hard lately and have obsessed over signs and it has taken a toll on your life, that frantic, chaotic energy could be what’s blocking you.

Sometimes you have to get out of your own way.

Another thing you can do is make sure you have enough room in your request for your desire to show up in many forms.

Finally, make sure you are taking inspired action on your part!

Manifesting and asking for help from the universe doesn’t mean you get to slack on your part.

I wrote an entire blog post on what to do when your manifestation isn’t coming. It’s got so many more tips and ideas for you, so check that out if you need more help!

Finally, I know sometimes it feels like you’ve tried everything under the sun and it still feels like your manifestations just never seem to come.

Trust me, it’s really a thing — it’s not just you.

You’re not cursed, you’re not broken, and it doesn’t mean you’ll never get there.

In my experience, it just means that there could be one or more things blocking your manifestations.

You see, manifestation works and it works well.

I’ve found that it’s moved mountains for me.

But if you’ve given it some time to work and you still can’t get where you want to go — maybe you should try to see what’s blocking you.

This 100% FREE Quiz is super fun to do, and it’ll tell you instantly your #1 manifesting block so you can get to work releasing all that stuck energy!

That way, all your efforts won’t go to waste!

Take this 60-second quiz right now (and keep the results in mind WHEN you’re journaling).

It’ll open a whole new level of understanding that’ll get you to your goal SO much faster!

P.S. Don’t let unnecessary blocks keep you from leveling up! Take the 100% FREE Quiz and free up some energy to let the Universe work its magic!

More signs from the universe 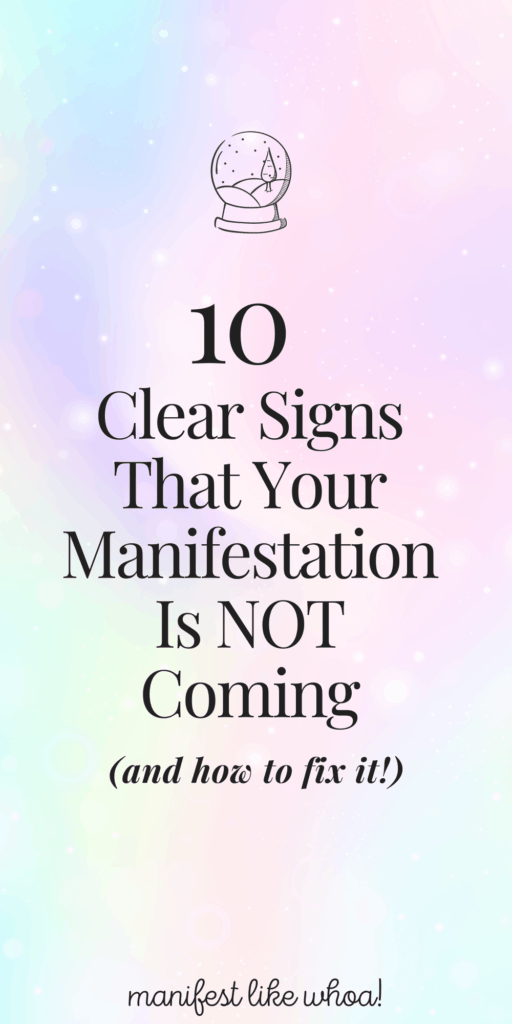