This is a blog post describing the different meanings of the Seven of Wands tarot card in the Minor Arcana of the standard Rider-Waite deck.

Read on to discover the different meanings of the Seven of Wands upright and reversed for money, love, and other situations in your life.

Seven of Wands as Feelings

The Seven of Wands represents feelings of protection, defensiveness, and holding your ground. You may feel the urge to stand up for yourself or your beliefs, to defend and protect it. There is a strong sense of being determined and opposing those who oppose you. You may be feeling overwhelmed by the demands on your time and energy or be feeling harassed or scapegoated.

Seven of Wands as How Someone Sees You

The Seven of Wands in this position can represent how someone sees you. They may see you as strong, determined and assertive. They may admire your courage and will to fight for what is important, or they may feel threatened by it. You could also be seen as a person who fights for their beliefs and stands up for those around them.

Seven of Wands as What Someone Wants From You

The Seen of Wands means that someone wants you to take a stand; they want you to be assertive and make your voice heard. They may be looking for someone to protect them or their beliefs and for you to lead the way. You could also be asked to help resolve a tricky situation with your strength of will or even provide moral support during difficult times.

Generally speaking, the upright Seven of Wands brings the energy of fighting off the haters, standing up for yourself or what you believe in, and being determined to accomplish your goals. You may feel protective and territorial, wanting to keep people out of your space or away from what is important to you.

It could also indicate a struggle against an opponent coming at you with everything they have.

Whatever the challenge, this card encourages you to stay strong and believe in yourself—you can do this.

It also advises that you may need to take a step back and assess the situation before reactively jumping into action.

Make sure you understand all the details first, then decide on the best way to proceed.

This card could also represent resistance or even harassment coming your way in the near future so be prepared for some sort of adversity.

If you’re in a committed relationship and the Seven of Wands shows up in your reading, it means that the relationship is going through some tough challenges and you will have to defend your love.

It could be that outsiders dislike your union and want to throw wrenches in your plans.

Or, that you have other outside challenges threatening to break you apart, such as conflicting work schedules or family interference.

No matter the challenge, this card encourages you to be determined and fight for what’s important to you.

If you are single and the Seven of Wands shows up in your reading, it means that while true love may be within reach, that person may come with some people or things challenging your union.

Be prepared to have the courage to fight for what’s meant to be, and don’t let other people or obstacles stand in your way.

Another possible meaning is that you will struggle with issues of jealousy. You may feel like your potential partner doesn’t have enough time for you, or that they put other people first.

It’s okay to express your emotions in a healthy way but don’t be too territorial or you could chase away a good thing.

If your main concern is your career path when the Seven of Wands shows up, you should expect challenges in the workplace.

You may have people actively thwarting your progress, trying to keep you down. Especially if there’s a promotion or raise on the horizon, don’t be surprised if you’re met with some opposition.

You may also see your workload increase significantly as well, so make sure you are prepared to take on the extra responsibilities and challenge yourself to stay productive.

Otherwise, this card advises that you need to remain strong and fight for what is important to you.

When it comes to your money, there’s the sense that as soon as you get on top of things financially, another thing comes to knock you back down.

The good thing about the suit of Wands is that it usually represents speed.

So this phase will not last long.

Try your best to weather this storm – you’ll get through it. 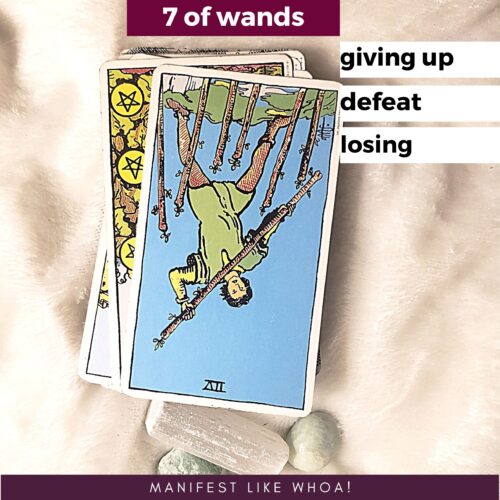 When the Seven of Wands appears reversed, it means that you’re exhausted and either have given up or are considering giving up.

It could also represent a lack of courage or self-belief, causing you to yield or surrender rather than fight.

You may have been worn down by other people or by your own inner struggle and need to take time for yourself before facing the world.

Though usually in society quitting is seen as a negative thing, try your best to resist the urge to view things in this way.

It’s important that you stay authentic and true to yourself because sometimes withdrawing from a situation that no longer serves you is indeed the best option.

If you are in a committed relationship and the Seven of Wands shows in a reversed position, it usually means that you’ve come to the end of your rope with the situation.

It feels like a lose-lose situation now, but don’t give up yet.

You may have to come to a resolution or agreement that is not ideal, but at least it might provide some peace of mind.

This could manifest as compromising in terms of shared responsibilities or territory within the relationship.

If you’re single and the Seven of Wands appears reversed, it means that you are tired of looking for love and are close to giving up.

Take some time for yourself and be sure to recharge your batteries before you start the search again.

You want to make sure you’re acting from a place of strength, not weakness. Don’t settle for anything less than what you truly deserve.

The Seven of Wands reversed in a career reading means that you are either in danger of losing control or power, or have already done so.

This could be due to a scandal that has rocked your professional world, or simply because you are being seen as overbearing and not allowing others to take charge.

In terms of money, the reversed Seven of Wands indicates that you may be exhausted from trying to make ends meet.

You are likely feeling overwhelmed and may even be close to burn-out.

This card suggests that you need to take a step back from the situation, recharge, and come up with a new plan.

Take some time for yourself and remember that this too shall pass – don’t give in to fear or despair.

You will find a way out of this difficult period. With resilience and determination, you can get back on track financially.

Final Thoughts On The Seven of Wands Card

Congrats on taking the first step to work with the tarot and learning to read for yourself and those you love!

The Seven of Wands is a reminder to stay strong and fight for what is important to you.

Though at times it may seem like the battle is never-ending, take a deep breath and remember that speed is often on your side.

If things become too overwhelming, it’s okay to take a step back and regroup – don’t be afraid to admit when something isn’t working for you.

There is power in quitting at times.