This is a blog post describing the different meanings of the Seven of Swords tarot card in the Minor Arcana of the standard Rider-Waite deck.

Read on to discover the different meanings of the Seven of Swords upright and reversed for money, love, and other situations in your life.

Seven of Swords as Feelings

The Seven of Swords represents feelings of trickery or wanting to “get one over” on someone or something. It could indicate that you are feeling like an outsider or have a sense of being used. You may also be feeling vulnerable to manipulation, or as though you are the target of someone’s maliciousness or deceit. It’s possible that you’re experiencing betrayal from someone close to you, or even feel like a victim in some way.

Seven of Swords as How Someone Sees You

The Seven of Swords means someone sees you either as a trickster or a liar, or someone that they can play, trick, or lie to. They may view you as someone they can manipulate or take advantage of. It could also represent that someone is jealous of your success and doesn’t want to see you succeed.

Seven of Swords as What Someone Wants From You

The Seven of Swords as a message from someone else could mean that they are trying to manipulate or deceive you. It could be someone looking for money or resources, and they may see you as an easy target.

They may also want to use your trust in them to get something from you that you wouldn’t normally give away. It’s possible they are using guilt or emotional manipulation to get what they want from you.

It’s important to be aware of any hidden motives, and take a step back if you feel like someone may be taking advantage of you.

Either you are planning to trick or deceive your way into something, or be prepared for someone to do so to you.

This is the most sinister card in the tarot, and it generally means that you need to watch your back.

Even if you’re on the doing side of the trickery, it generally means that things might not turn out as planned.

You may be taking a risk or acting with little information, so it’s important to stay focused and aware of the consequences.

It could also represent something coming to light in your life, which could uncover some hidden truths or secrets you need to face up to.

In some cases there’s a lighter meaning, however.

It could represent someone who is witty and cunning, able to navigate tricky situations with ease.

In general, the swords represent intellect.

So it could just be that there’s a situation that needs to be handled with intelligence and logic.

Keep your head up and be prepared for anything, as this card could represent quite the challenge.

If you’re in a committed relationship and the Seven of Swords shows up in your reading, it usually means there’s is some deception or deceit coming from one of the partners.

It can mean that someone is trying to manipulate their partner in some way, or it could suggest that there are two sides to the relationship, something unknown behind closed doors.

There may be deception at play for one person to gain control over another.

If you’ve suspected cheating or infidelity, you’ll want to examine that further now.

Such situations aren’t limited to romance either.

It could be lies about money, family, or anything else. So keep an open mind and honor your intuition about what’s going on.

If you’re single and looking for love, the Seven of Swords could mean you need to be careful and cautious.

It might suggest a potential partner is not being honest with you, so it’s important to pay attention to any red flags that come up.

If your main concern is your career path when the Seven of Swords shows up, you may need to bend the rules a little bit to get what you want.

It could mean you need to take risks in order to succeed, but make sure any decisions you’re making are thought out and well-researched.

It could also mean that you are being offered a short-term reward for a long-term loss.

Be wary of any promises that seem too good to be true, and make sure you are aware of the possible consequences if you decide to go ahead with it.

For finances, the Seven of Swords could indicate that someone is trying to deceive or swindle you out of your hard-earned money.

Be sure to research any investment opportunities thoroughly, and keep an eye out for anyone trying to take advantage of you.

When it comes to money matters, the Seven of Swords could be a warning not to get too greedy, which could lead to unwanted consequences.

Use intellect and logic. Follow hard facts and you’ll be alright.

And remember – if it seems too good to be true, it probably is. 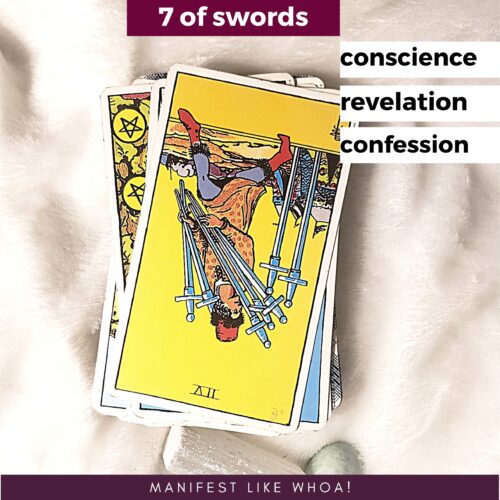 When the Seven of Swords appears reversed, it represents something done in the dark coming to light.

You may receive a confession for something you suspected all along.

Or, if you’re in the position to confess for something, this could be a sign that you should confess now.

This card can also represent someone coming to their senses and realizing that the lies, deceit, or cheating have gotten out of hand.

In some cases, it can also represent an unworkable strategy – particularly when it comes to projects and goals.

The reversed Seven of Swords can indicate that you’re being outsmarted and will need to go back to the drawing board to succeed.

If you are in a committed relationship and the Seven of Swords shows in a reversed position, it usually represents turning over a new leaf and starting fresh after infidelity has already been discovered.

It can also represent a partner finally coming clean about something they’ve been hiding from you.

For single folks, the reversed Seven of Swords could be an indication to take your time and do some due diligence before jumping into a relationship.

Someone may seem too good to be true, so it’s important to pay attention to any warning signs that come up.

It could also mean getting away from any potential partners who are only trying to manipulate or control you and your choices.

The reversed Seven of Swords can represent being honest with yourself and saying no when it’s necessary.

The Seven of Swords reversed in a career reading means that you are being given a second chance.

It could be a sign that you are able to move away from a poor decision or unworkable strategy, and start over fresh.

For finances, the reversed Seven of Swords can represent someone coming clean about their financial secrets or uncovering hidden assets.

It’s important to do your due diligence here, and remember to always trust your gut.

The reversed Seven of Swords can also represent a change in luck, and you may find that you have more opportunities than expected when it comes to money matters.

It could be time to take risks and try something new – but make sure you weigh the pros and cons first.

In any case, the reversed Seven of Swords can represent a fresh start, and a new chance at success.

Final Thoughts On The Seven of Swords Card

Overall, the Seven of Swords is a card that highlights the importance of being honest in all aspects of life – whether it be relationships, finances, or other decisions you have to make.

It’s a reminder to be mindful of your actions and to make sure you’re not taking advantage of others in any way.

The Seven of Swords can also represent an opportunity for change and redemption – so don’t be afraid to start over if something isn’t working out.

With the right strategy and dedication, you can turn even the most difficult situation into something better.