So you want to manifest your dream life with the law of attraction.

You’ve found a cool manifestation technique you want to try.

And you want to experience the joys of your dreams in real life.

You’re excited and motivated, but there’s a part of you that worries about what might happen if it backfires.

The law of attraction is all about positive thinking, right?

So why would it manifest anything other than what we want?

That’s where this article comes in!

We’ll talk about the reality behind manifesting so you’ll know the risks and consequences of the law of attraction if it should backfire.

5 Things That Cause Manifesting To Backfire

1- Trying To Take Away Someone’s Free Will

It’s not a good idea to use the law of attraction to try and take away someone else’s free will.

That can backfire in two ways: first, by trying to control something that you don’t have any power over (which is never going to work), or second, if it works and you wind up getting more than you asked for!

An example of this is when you try to manifest a specific romantic partner when they clearly don’t want to be with you.

Playing with energy the wrong way could backfire. You could attract them but then they wind up being a stalker, abusive, or negative in some other way.

Or you could manifest the wrong person altogether — and a host of issues come with that.

It’s happened before and it’s so easy to do!

Keep your intentions pure and focus on manifesting change in yourself.

RELATED: One Of The Best Law of Attraction Scripting Success Stories (For Love)

2- Manifesting Something That You Have No Space For

Another way manifesting can backfire on you is if you try to manifest something that is outside of your reality.

You cannot create anything unless you have space for it in your life.

Now, there’s nothing wrong with manifesting big things. Having an oversized goal is totally fine. But it needs to be possible in your current reality at least.

If it’s not, then this is absolutely a limit to manifestation, and you don’t even need to go there!

It will just be frustrating and lead you on an emotional roller coaster ride with no real payoff.

An example of this falls in the romantic realm also.

The problem is… well, you’re still communicating with (and sometimes still intimate with) your toxic ex.

And look at your bed… one side is clear enough for you to sleep in, but if your dream partner showed up in your life tonight and wanted to spend the night at your home… would they have a place to sleep?

When you have too much clutter (mentally, physically, energetically, or spiritually) in your life and try to manifest something that you clearly are not prepared for… guess what happens?

Again, you’ll attract the opposite of what you’re asking for.

You’ll attract someone who says they want to be with you, but they’ll be just as unavailable to you as you are showing the Universe you are to them!

Who needs to manifest a negative person or a toxic person? Nobody!

Make sure you have cleared a path for what you truly want to come into your life.

3- Manifesting Something That Isn’t Good For You

A third way law of attraction manifesting can backfire on you is when you try to manifest something that feels good at the moment but will not be for your highest and greatest good.

A perfect example of this would be a casual hook-up with someone while on vacation because it’s easy, fun, and available at the present moment. But after your week-long stay together… will you be left happy with the outcome?

Is this something that is going to serve you?

Or will you wind up worse off than you started?

4- Going Against The Laws Of Nature

Super Attractor: Methods for Manifesting a Life Beyond Your Wildest Dreams
Check Price

Another way manifesting can backfire on you is when you aren’t specific enough or are unwilling to take inspired action.

Attraction without action is useless.

The strongest example that comes to mind is with manifesting weight loss.

So deep down inside you have to acknowledge that you can’t really bypass the laws of biology and nature.

No matter how many law of attraction and manifesting techniques or spells you try, unless you are willing to put in the work on the physical realm, your manifestation ability will not lead to weight loss!

Well, if you insist on asking the Universe to assist you without doing your part, you can manifest weight loss without trying in MANY ways.

You could lose a limb, or you could wind up really sick and lose weight that way!

What you want is healthy weight loss and while the law of attraction can help you in subtle ways, you can’t escape the laws of nature.

Try to do so, and manifesting will backfire on you so hard you’ll wish it wasn’t magic!

5- Manifesting From A Place Of Lack

Finally, the last way manifesting can backfire on you is if you hold negative thoughts or intentions while manifesting.

This could be anything from manifesting or willing harm to another individual for your benefit.

If you are in love with someone who is already in a relationship — don’t try to manifest their relationship to fail.

That can backfire on you and bring you nothing but negativity.

Or if you want to manifest love from a place of feeling negative emotions because you don’t have someone, focusing on what you don’t want to feel instead of manifesting a happy, fulfilling romance with someone who matches your vibe can go all the way wrong!

You could attract someone who preys on those insecurities quite easily.

(This happened to a friend of mine when she asked for a man to help her financially and make her feel loved… a week later she met a man, had a whirlwind romance, only to discover he was married!)

Super Attractor: Methods for Manifesting a Life Beyond Your Wildest Dreams
Check Price

Generally, if you are a dedicated student of manifestation, keep your heart open and your intentions pure, you don’t have to worry much about manifesting backfiring on you.

Make sure you stay positive, stay focused on manifesting things that have to do with YOU (not the other person), and you should be okay!

I hope you found this blog post helpful, and don’t forget to sign up for FREE tarot readings on the form at the top of this page! 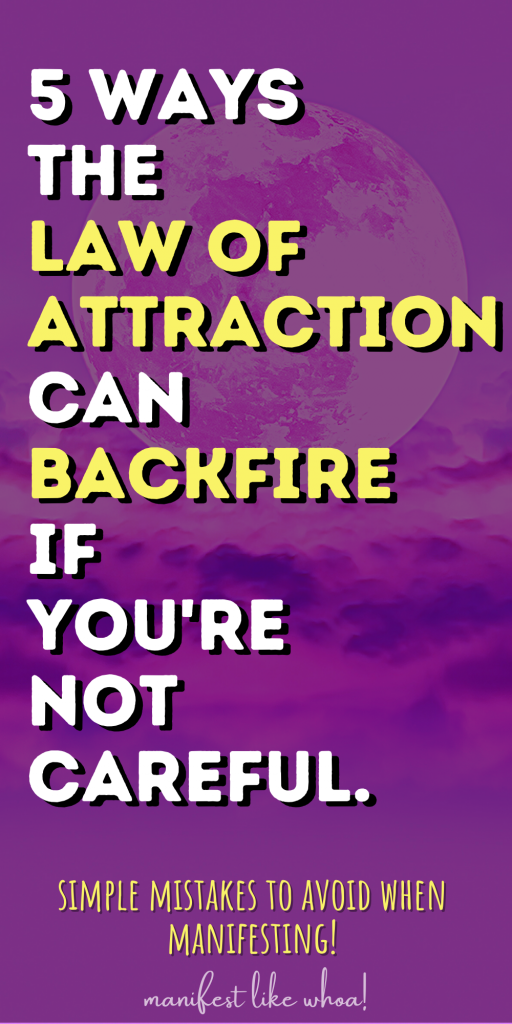