Today I want to share one of the best law of attraction scripting success stories I’ve ever heard! One blog reader downloaded the free scripting template (available at the end of this article), tried the scripting manifestation technique, and manifested her soul mate. She said it was okay for me to share her story, so this blog post is going to be all about Marie’s wild success with scripting for manifesting love.

Table of Contents show
Always A Bridesmaid, Never The Bride
Dating Sites Were Annoying
This Law of Attraction Technique Changed Everything
She Didn’t Believe It Would Work
She Manifested Success In Love
Words Of Advice About Scripting
So, There You Have It
Join The Other Scripting Success Stories
Save This Article For Later

Always A Bridesmaid, Never The Bride 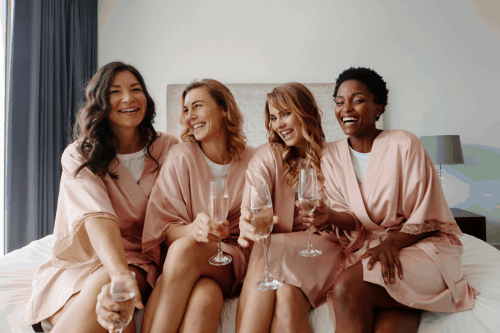 After graduating from college, Marie was really excited about moving on to the next phase of her life.

Her biggest dream was to have her dream job in advertising, get married, have a gorgeous family home, and have her first baby by at least age 30.

Everything was going great — except the husband and baby part.

Marie’s career was going excellently and her financial life was in tip-top shape.

She bought a luxury condo in the swanky part of town and lead a mostly happy life.

But after being dumped by her ex (who was no good for anyway), she found herself lonely, depressed, and somewhat bitter.

To make matters worse, it seemed like every other month, she was the bridesmaid for one of her friends’ weddings.

Always a bridesmaid and never the bride!

Marie got so tired of swiping on dating apps that she eventually just gave up.

Of course, it didn’t help when her friends would tell her, “He’s perfect for you,” as if they had a sixth sense about these things or something.

But Marie knew there was no such thing.

So instead, she chose to delete all those apps and accept that she was doomed to be alone forever.

FIND OUT NOW: Is He Your Twin Flame? Get An Answer From The Universe In Minutes…

This Law of Attraction Technique Changed Everything 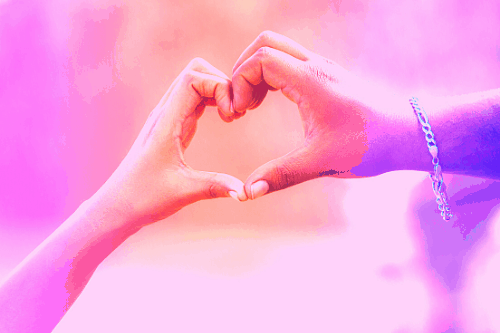 One day, after being asked about her love life for what seemed like the hundredth time by yet another friend, Marie remembered something she had seen on Pinterest.

It was the article here on the blog about writing a letter to the Universe.

She found it on her Pinterest account, opened it, and though she was totally skeptical, she figured “what the heck?” And gave it a chance.

She Didn’t Believe It Would Work 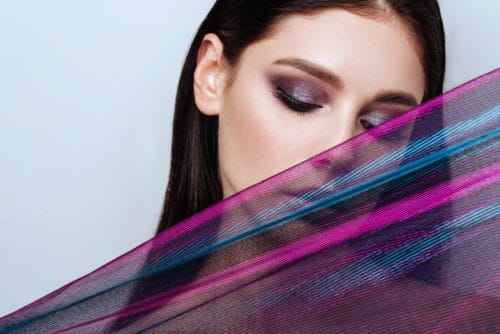 Marie knew that even if she wrote the letter, it didn’t mean anything would happen.

She may as well have been writing to Santa Claus for all the good her words could do.

But what did she have to lose?

Not much! But she could possibly manifest the man of her dreams… so why not?

So Marie sat down and began writing her letter.

“Dear Universe, I want to tell you all about my new relationship! I met the dreamiest guy. He’s handsome, hilariously funny, has loads of money, and great teeth!”

(She figured why not shoot for the Moon)

After about three pages full of detail about what he looked like, how he made her feel, the types of things they enjoyed doing together, and how seamlessly he fit into her life, she was finished.

She folded her letter, stored it under her pillow, and slept with it there every night for a few weeks.

Marie began having strong dreams about falling in love and starting a new relationship, but chalked it up to just being what was on her mind most at the time.

She Manifested Success In Love 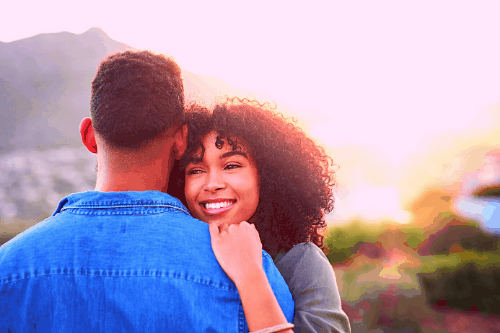 One day Marie found herself at home on her couch when the doorbell rang. She had just put on some sweats after getting out of work for the day and was ready to relax and unwind.

But when she opened the door, there stood a handsome man with an expensive suit and tie.

He introduced himself as Kevin and seemed shocked to find her in sweats.

Kevin had apparently mistaken Marie for his date for a business dinner he was booked for that evening, but there was this strange attraction between the two.

Once discovering he had the wrong unit, Kevin apologized and left.

He expressed what she felt. That he was interested in getting to know her. So, he asked for her number before leaving again.

They’ve Been Together Ever Since

Kevin wasted no time and called Marie that same night when he got home from his business dinner.

They stayed on the phone the entire night until the wee hours of the morning, went on their first formal date that weekend, and have been together ever since! 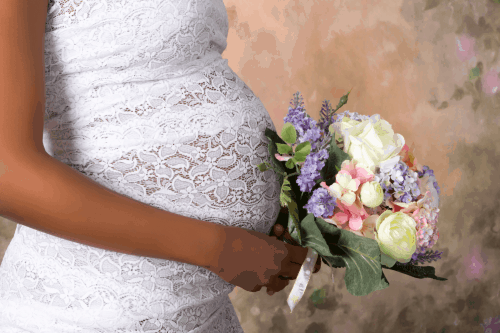 Marie and Kevin got married, purchased a lovely new home, and gave birth to their little boy not long after.

Words Of Advice About Scripting 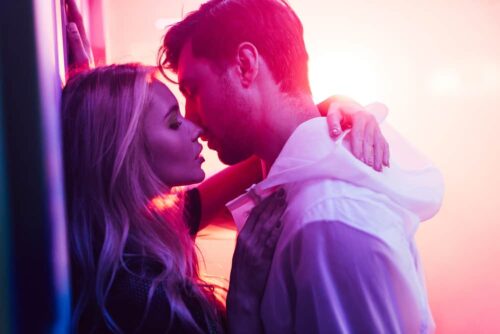 Marie wanted to share her story so badly mostly because she was so skeptical at first (it went against the beliefs she grew up with) and wishes she tried it sooner.

She was so blown away by it actually working to help her manifest her dream life, and wanted to give hope to others who might struggle with the question of “does scripting really work?”

Because in her opinion, it did!

I asked if she had any advice to others for scripting and she said “try it sooner than later.”

So, There You Have It 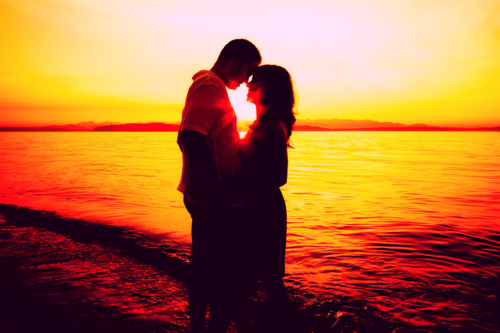 So yeah, I hope you enjoyed Marie’s law of attraction scripting success story!

I’ve heard so many over the years (and even have quite a few of my own), but hers is really next-level soul mate manifesting.

I know so many people struggle with manifesting love, manifesting ex-lovers back, or twin flame manifestation and I wanted to share this little nugget of inspiration I received.

I hope it helps you take the leap and try scripting for yourself!

Join The Other Scripting Success Stories 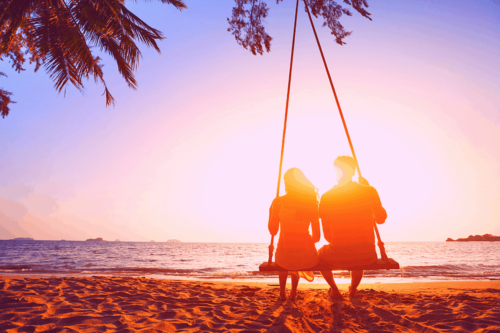 If you’re ready to give scripting a try, read the full scripting tutorial I wrote.

I hope you become one of the latest and newest law of attraction scripting success stories. 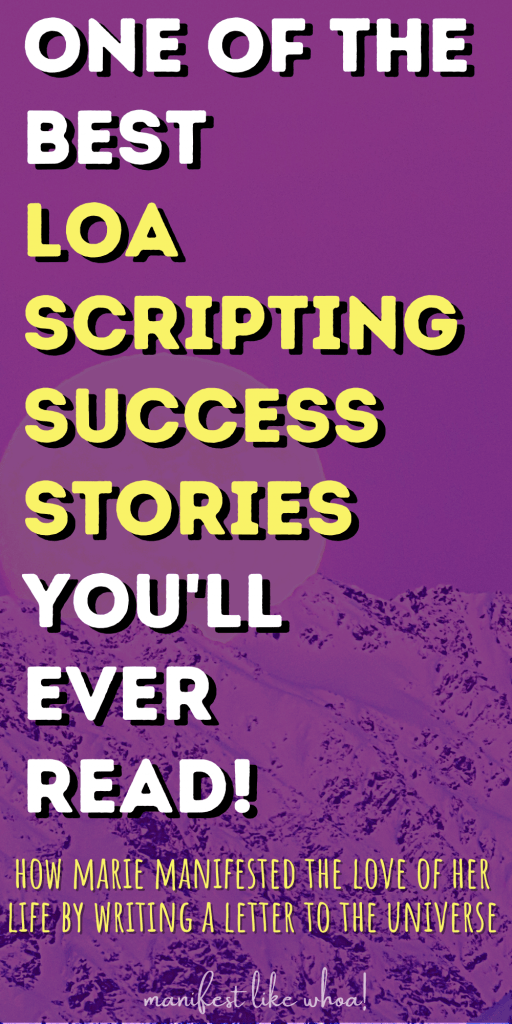