The Judgement tarot card (XX) is the 21st Major Arcana card in the standard Rider-Waite Tarot deck. It represents you or someone you love being judged or being judgemental of others around you. On the lighter side, it can also represent your personal awakening, coming to terms with who you are, and being more able to evaluate yourself and make changes to become the best version of yourself possible. But, as always, the meaning of a tarot card is heavily influenced by your situation at the time of the reading and the meanings of surrounding cards. Read on to dive deep into the meaning and symbolism of the Judgement tarot card. 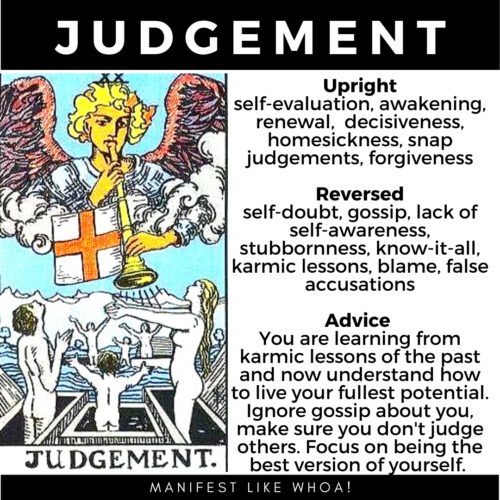 When Judgement appears in a tarot reading, it is most often an indication that there are some changes required by you or someone you love.

It may indicate self-evaluation, personal awakening, renewal, or the desire for change.

Another upright meaning of the Judgement Tarot Card is that someone is literally being judged or doing the judging.

If it’s the latter, you might want to do some soul searching to see why you feel the need to be that way.

Another meaning is that you have recently experienced a spiritual growth or awakening and you’ve done some healing.

You’re able to see the mistakes of your past, and you know how to behave in the future.

You’re ready to move forward in a more positive direction in your life.

Finally, The Judgement card upright can signal a favorable outcome in a court case or legal matter.

However, if you have done wrong, you won’t be able to run from the truth.

You’ll have to face it head-on.

If you’re in a relationship and the Judgement card appears upright, there are a few possible meanings.

First, it could be that you and your partner disagree on some issues or on how you do things, and you are judging each other too harshly.

This could be a sign of fighting nastily and taking deep digs at each other during arguments.

Be careful because once you say something, you can never take it back.

Throwing jabs in the heat of the moment can erode the fabric of your relationship over time and you don’t want to do more damage.

Next, it could be a sign that one partner has made a mistake in the past but it’s still hard to forgive in the present.

Even if there’s not outright judgment, there is still tension in the relationship because one person doesn’t fully trust the other.

The Judgement is all about forgiveness for past deeds.

Of course, if you can’t get past your problems there’s no need to force it.

But if you truly want to move forward, you’ll have to truly forgive.

Finally, The Judgement card can indicate that you will be separated from your partner by water or sea.

So look out for that coming up as well.

If you’re single and The Judgement card comes upright in a tarot reading, you could be feeling the urge to settle down.

The thing is, your standards are so high that nobody can meet them!

The problem with this is that you’re not giving people a chance to show their best side.

That’s why you think they are all the same after only meeting them once or twice.

You’re judging too soon, without allowing for enough time to pass, which is leading to your loneliness!

Give yourself a chance to get to know someone new, even though they may differ from who you’ve gone for in the past.

You may be too harsh on your potential partners.

When it comes to your job or career, The Judgement card often shows up when an evaluation is on the horizon.

You may be being monitored and watched for performance evaluations that could lead to a promotion or a shift in responsibilities.

Much of the time, you won’t know this is happening.

So behave as if you’re always being watched and considered for an upgrade!

Put your best foot forward, tie up loose ends with any projects you may have been slacking off on, and see how things turn out in the near future.

When it comes to your financial situation, the Judgement card upright brings the advice not to make any large or risky investments or purchases right now.

Avoid “snap-judgments” and going with your feelings.

Make sure you gather all the facts and make intentional choices because now is generally not the most favorable time for you and your money.

When The Judgement appears reversed in the tarot, it is most often an indication that you are experiencing excessive self-doubt or guilt that is holding you back from taking action.

You may be so caught up in the past that you are unable to learn from it or let go.

There should always be space for forgiveness because holding on to grudges is toxic, especially for your own mental health.

The reversed Judgement card can also be a sign that you’re stuck in a loop of making the same mistakes over and over but never learning from them.

You may be wondering why things in your life don’t ever improve.

The answer, when The Judgement card shows in reverse, is that you’re being stubborn and you’re not making the changes necessary for progress.

Judgment reversed also means that you could be engaging in gossip or being overly critical of others because you feel insecure or inadequate in some way.

It’s almost like pointing out someone else’s flaws or shortcomings will make you feel better about yourself.

But if this is the case, it means that you don’t realize your own negative qualities or flaws and how much work needs to be done on yourself before you start pointing out other people’s problems!

The Judgement card reversed also signals an unfavorable outcome in a court case or legal matter.

So, be prepared for things to not go your way if you’re involved in such matters at this time.

The Judgement card reversed can also mean that you are being excessively judged, target, or even blamed for something you did not do.

It’s time to speak up and defend yourself before you’re falsely accused or banned from an opportunity that you want.

The Judgement reversed is a warning not to burn bridges, though, because karma will come back around and bite you in the butt!

If you’re in a relationship and the Judgement card appears reversed, you may be experiencing gossip about your relationship or your partner that you don’t believe to be true.

If your gut is telling you these things aren’t true, you’ll need to try your best to ignore them so that they don’t tear your relationship apart.

However, you may still want clarity on the rumors, especially if there have been issues of infidelity in the past.

Another meaning of The Judgement card in reverse is that you are repeating the same cycle from your past.

You, as a couple, aren’t learning from your mistakes and keep repeating the same mistakes.

If you’ve been through rough patches before and thought you were on the other side, but things still aren’t going as expected, you’ll have to make more drastic changes.

It’s time to sit down and discuss your relationship and what’s going wrong.

Are you ready to acknowledge that what you’re doing now isn’t working, and pick a different path?

If you’re single, The Judgement card reversed means you’re blocking yourself from taking a chance on love because you’re afraid to show people the real you.

You’re afraid of being judged, that you’re not good enough, or that you don’t measure up in some meaningful way.

You may be so caught up on a past relationship that you’re holding on to the past, rather than taking a chance with someone new.

You could be waiting for an ex to come back (even if that relationship wasn’t good for you) because it’s so familiar and you enjoy the idea of not having to start all over again.

But take stock of all the great qualities about yourself and what you have to offer and bring to the table!

You’re an amazing person who deserves to be in a healthy relationship.

And if you’re afraid of getting hurt again, the best way to deal with that is by facing your fears head-on.

Take some time for yourself and clear your mind of any bad memories or thoughts about what happened.

Then, find the courage to date again soon so you can start living life to the fullest!

The reversed Judgement card can mean that you are being too harsh on yourself.

You may feel stuck at your job, or in the same place for a while now which has made you lose interest in what you do or even your career path.

As such, you’re at a turning point and you know things need to change, but if you’re not careful you can get stuck in a downward spiral of hating where you are but not feeling like you can do anything about it.

The way out is to take decisive action.

If any opportunities come your way, seize them!

When it comes to your money, the Judgement card reversed is a sign that you may be being too much of a tightwad.

You don’t need to run out and blow money you don’t have, but you can live a little and enjoy some of your money.

You can be financially responsible while still living a comfortable life, so enjoy and live a little bit!

Final Thoughts On The Judgement Card