Before you think of giving up on manifesting your specific person, there are a few things you should consider. In this article, we’ll explore several things that might happen once you give up manifesting your SP.

1- You may not want them anymore

The first thing you should know is that after giving up on manifesting your specific person, you might eventually realize that you don’t want them anymore.

Now, depending on your reason for giving up on the manifestation, this may already be in play, or it could take some time to become your reality.

But here’s a common situation I see all the time…

Someone is manifesting their SP, and they go at it hard for a few weeks.

Doing all the affirmations and exercises, keeping thoughts positive.

They see a bit of movement in the right direction, and the SP comes back in some format (or at least shows signs of turning like maybe unblocking on IG or sending texts.)

They start to get the ick and realize the SP isn’t all that desirable.

Now, if you’re obsessing over your SP and can’t imagine feeling this way… let me assure you that you may reach a point where you just don’t want them anymore.

This is one of the best things that can happen because it means you are actually reclaiming your power and no longer operating from a place of lack.

Which sometimes means you wind up getting the upper hand in the situation (whether you want it or not.)

2- They may come back into your life

Oftentimes, as a result of #1, once you give up on manifesting your SP, only then do they come back into your life.

The reason for this is, again, that you are no longer operating from a place of lack.

You see, by default, an SP manifestation is automatically based on a feeling of lack and unfulfillment.

You are pining away for someone else. You realize the angst and sadness and loneliness and a sense that your life isn’t complete without them.

So you’re spending tons of time focusing on what you don’t have.

You fantasize about what could be and how much happier you would be if only they were in your life.

As a result of this focus, you’re actually attracting more feelings of lack and unfulfillment.

But once you give up on manifesting your SP, for whatever reason, your subconscious mind doesn’t automatically forget or release all the work you’ve done.

If you’ve spent, let’s say, three weeks doing affirmations and exercises and visualizations, after giving up on your SP, your subconscious mind will still see you two together.

Since you don’t care, you’re no longer actively working against yourself.

It can be frustrating that once you let go of your manifestation is when it comes, but that’s how it goes sometimes!

So yes, once you give up on manifesting your SP – you might expect them to come calling asking to see you.

3- You will see signs and symbols related to them

Another common occurrence after giving up on your SP is that you will start to see signs and symbols related to them.

This could be in the form of physical things like seeing their name or hearing a voice that sounds like theirs.

It could also take the form of a song on the radio or a commercial that’s playing that reminds you of them.

You might start to see angel numbers that represent them (a common one is their birthday as a repeating number sequence that seems to follow you everywhere.)

Or, you could have a vivid dream about them.

If you’ve suddenly given up on manifesting your SP after working on this for a while, this could be your subconscious mind’s way of keeping you in the habit.

It’s likely “used to” you doing this work and isn’t quite letting go of you.

(Again, this is why it’s extremely common for SPs to come into play once you’ve given up.)

Now, this can be annoying, especially if you’re giving up because you think they’re a loser and you just want to move on, but it’s just one of those things that happen to people from time to time.

Another unintended consequence of giving up on manifesting your SP is that you might actually manifest someone better for you.

This is because, as I said before, when you’re focused on an SP, you’re usually coming from a place of lack.

You think that this person will complete you in some way or make you happier than you are now.

But once you give up on manifesting that specific person, you are no longer operating from a place of lack and your vibration instantly and automatically increases.

And do you know what happens when your vibes are sky-high?

Not just attractive to the Universe (and start to manifest all sorts of interesting things), but you become like a magnet for other high-vibe people who are now on the same energetic frequency as you are.

So that’s why it’s not uncommon for people to give up on an SP and then manifest someone even better – because they were coming from a place of lack, the situation was stressing them and leaving them in a low-vibrational state, and now they’re attracting something more aligned with who they truly are!

It’s actually beautiful to witness because it’s a true case of the Universe working in your favor.

Last but not least, usually, after giving up on an SP, your self-concept will improve.

This is because when you’re focused on someone else and what they think of you (and whether or not they’ll love you back), you’re actually putting yourself in a pretty low position.

Because think about it…

If you’re constantly worried about what another person thinks of you, you don’t think very highly of yourself!

If you’re waiting and wondering when they’ll call or unblock you or whatever, you’re automatically sending a signal to yourself that they are the valued person – not you!

But after giving up on manifesting that person and beginning to focus on yourself again, your self-concept will begin to improve.

You’ll start to see yourself as a worthy and lovable person, which is exactly how you should see yourself!

In fact, this is one of the most crucial aspects of manifesting an SP that I think many people miss and it’s sad.

It’s so much more about self-love and self-worth and the premium you place on yourself than it is about external manifesting.

So much of the time when you give up on manifesting your SP and you decide that YOU are the prize – you’ll discover it’s what you needed all along.

And your perspective and outcomes go sky high from there.

So, those are five things to know about giving up on manifesting your SP.

I hope this article has given you some clarity and peace of mind if you’re thinking about giving up.

And remember, it’s always better to focus on yourself than it is to focus on someone else.

The most successful relationships (of all kinds) are the ones where both parties are coming from a place of self-love, not lack.

So if you’re struggling to manifest your SP, ask yourself if you’re really operating from a place of self-love.

Just know that it’s something you can work on and improve.

And when you do, your manifests will start to change too.

With love, light, and most of all – magic, 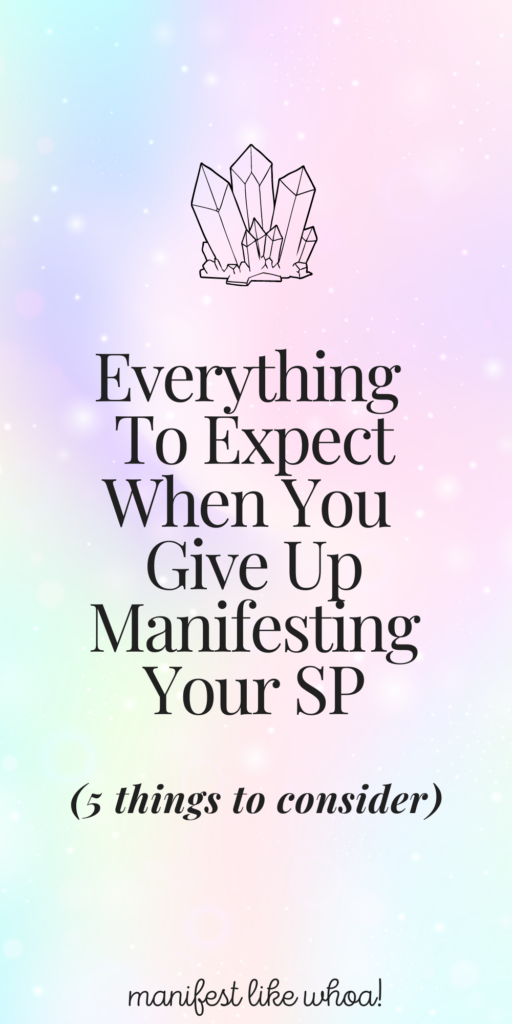